This movie was recommended to me by my dear friend Odair. I must admit he is one of the friends I take most seriously in the areas of culture and creativity.

The movie starts with the MGM Lion Roaring an image and sound that I have always linked to the experience that I am about to watch something special. The Lion doesn’t disappoint it delivers an orginal black and white masterpiece.

Totally enthralling movie set almost entirely in a room located in the New York County Court (a really hot room) . 12 Angry men who have the power to send a young man to the electric chair for murdering his father all sweat and argue over the decision. This movie shows us how important and how much responsibility the voting process is as it literally shapes the future. A responsibility we have steadily taken less seriously as we see voting turnout declining in most elections throughout the world.

I understand we are loosing faith and trust in our elected leaders. This should however spur us into taking the vote more seriously in order that we can elect leaders who can deliver hope and execute promises. The movie shows us how important each vote is and how discussion, questions, answers and introspection can ensure we vote wisely.

What starts as a clear case of murder turns into a complicated web of doubt. One clear thinking man played by Henry Fonda manages to give the young man a chance, something none of the other eleven initially did. One uncertain man manages to prove and persuade eleven very certain men that they aren’t that certain of what they believe.

This movie shows us the power of free thinking and how different outcomes can be if we are more open minded. The movie produces some great lines which are food for thought.

– “only an ignorant man believes that all men are born liars and that he has the monopoly on the truth”.

– “everyone has a breaking point, maybe his were two slaps too many”.

– “I use to call my father Sir, kids now days don’t do that anymore” (it seems a line we still use today for our youth, comparing them to our past and believing they getting worse by the day).

The movie also shows us that our past doesn’t decide our future as we experience the story of each character and see how they all have struggles. It does however show us that we stereotype each other far too quickly, instead of giving a fair opportunity to each person.

This one man is brave enough to stand up against the other eleven as he rallies support for his beliefs turning them one by one. It would have been easier if he had just conceded and voted with the others for a guilty verdict but would it have been right? Sometimes to do the right things we have to make the difficult choices!!! It’s Brave and not a weakness to be able to change your mind. Much easier to be ignorant and avoid thinking at all, but ultimately most dangerous to let others think on your behalf. This is entertainment at it’s best as there are no special effects yet the movie is unforgettable. I have become a fan of these simple movies they are just a lot more believable than most over worked current movies. I recommend you watch this movie as it will teach you valuable lessons that will enrich your way of thinking and life forever. 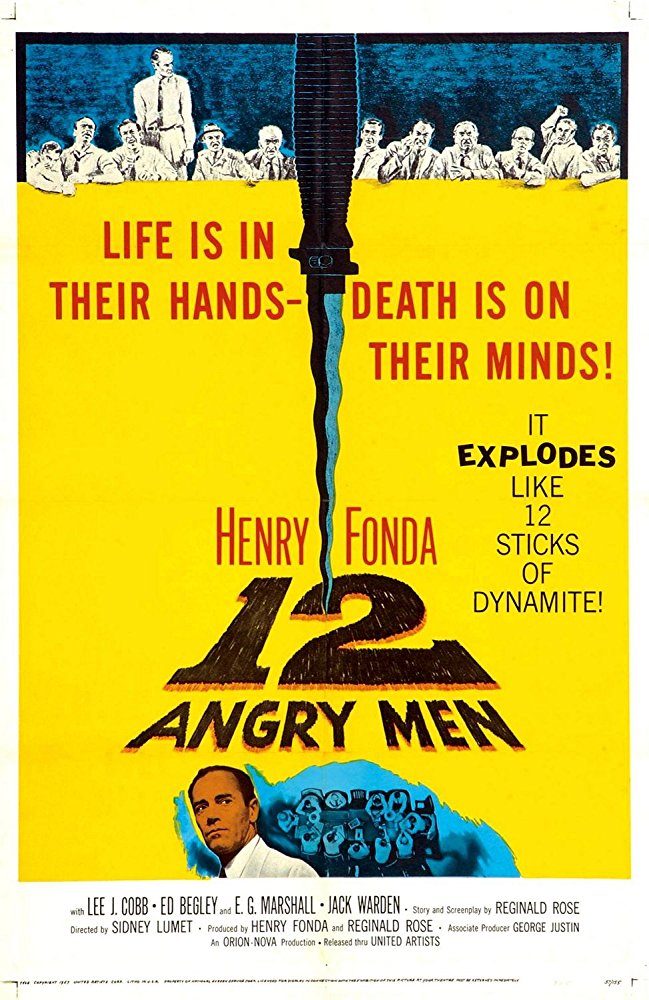